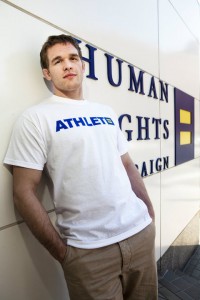 On Outbeat Now! Jeff Basham and Greg Miraglia talk about the “Day of Silence” and speak with allies who are doing just the opposite. Â One such ally is Hudson Taylor, founder of Athlete Ally a new organization that is combating homophobia in high school and college athletic programs. Â Hudson began his ally work at the University of Maryland where he was a theater major and a champion on the college wrestling team. Â After a friend came out to him, Hudson began to hear and respond to homophobic remarks and comments from his teammates. Soon after graduation, he began touring the country and working with organizations like Campus Pride speaking to college sports teams about homophobia. Â Most recently, Hudson shared his story in the new documentary, “Legalize Gay,” due to premier on May 5, 2012 on the Logo network.