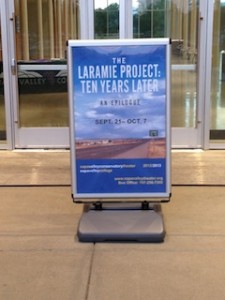 The Laramie Project Ten Years Later opened this weekend at Napa Valley College.Â  This is the first performance of this epilogue to the original The Laramie Project to be performed in California.Â  We begin by talking with Greg Pierotti, one of the writers and actors in both plays.Â  Greg told us about his experience traveling to Laramie in 1998 and then returning in 2008 as well as about his interview with one of the killers, Aaron McKinney.Â  On the Outbeat Youth segment, Greg Miraglia traveled to Napa Valley College to see the premier of the play and to talk with the play’s director, Professor Jennifer King, and many student members of the cast.Â  Many of the student actors were too young to remember when Matthew Shepard was murdered, but have discovered the story during their research and performance of this new play.