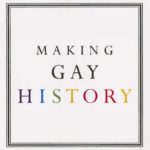 This year we are celebrating the 50th anniversary of the riots at the Stonewall Inn. Â But LGBT history and the movement toward equality and civil rights for LGBT people didn’t just start in 1969. Â There were many people who took part of the movement before and after Stonewall. Â This year’s 50th anniversary celebration is a great opportunity to reveal a large part of history that until recently has been largely invisible.

We have partnered with acclaimed author and LGBT historian, Eric Marcus, to bring you 4 special programs this year on the 5th Sunday of March, June, September and December. Â Eric is the creator of the Making Gay History podcast series. Â As part of the research he did for his history books, Eric sat down and recorded interviews with many icons in the LGBT civil rights movement. Â Some of the names you will recognize and others you won’t, but each of these incredible people helped shape gay history. In this special series, Eric Marcus shares some of his archive with us.

This entry was posted in Outbeat Extra. Bookmark the permalink.